50th Anniversary of “Dead for a Dollar”

Today is the 50th anniversary of the premier showing of T’ammazzo…raccomandati a Dio (“Dead for a Dollar”) in Rome, Italy. The film starred John Ireland and George Hilton and was directed by Osvaldo Civirani. It tells the story of the Colonel who is looking for his two cohorts in crime who have made off with $200,000 from a recent bank robbery the trio performed. He comes across one of them, Roy Fulton who was shot during the robbery, who’s died and is now being buried. This leaves only one, 'The Portuguese', to find. When he locates 'The Portuguese' he finds the funeral of Fulton was a hoax and he knows where he's hiding with the cash. The priest in charge of the funeral was actually Glenn Reno who is now Fulton's partner. The coffin contained the stolen bank money. When Reno returns after the funeral with a doctor for Fulton he finds the outlaw gone and thinks he's been double-crossed. He goes to the graveyard digs up the coffin and finds Fulton's body and the $200,000 missing. The crooked banker arrives in town looking for his split of the stolen funds. A series of double and triple-crosses ensue and in the end a fourth party, Liz ends up with the money and Reno, 'The Colonel' and the 'The Portuguese' follow in hot pursuit. 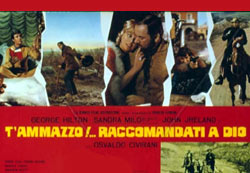