Who Are Those Composers? ~ Segura Garcia 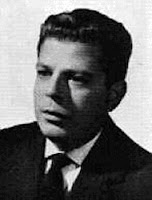 Gregorio Garcia Segura was born in Cartagena, Murcia, Spain on February 13, 1929. He was a Spanish composer, arranger and orchestra leader. Known by Segura Garcia he trained musically, first at the Conservatory of Cartagena, then continued on in Madrid. Considered to be a pianist he ended up a songwriter and composer for films and musical revues. With his brother Alfredo Garcia Segura they created many pieces and signed them as Brothers García Segura. Since the late 1950s, he composed music for nearly two hundred Spanish films including six Euro-western starting with “The Sign of Zorro” (1962) to “Al este del oeste” in 1984.