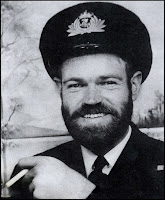 Canadian actor Murray Westgate, familiar to an early generation of TV viewers as Esso’s ‘Happy Motoring’ pitchman on Hockey Night In Canada, has died. Born in Regina, Saskatchewan, Canada on April 16, 1918, Westgate celebrated his 100th birthday at Sunnybrook Health Sciences Centre in Toronto. Well into his 90s, he was receiving visits from friends in the broadcast world and NHL alumni. Westgate was a radio operator in the Canadian Navy during dangerous convoy duty in the Second World War. After the war, he moved to Vancouver to work in local theatre. Murray appeared in several films and television series including the role of Joe Bourke in the 1969 Euro-western TV series “Adventures in Raibow Country. Murray died August 27, 2018.
Posted by Tom B. at 2:29 PM