Who Are Those Guys? ~ Sarturno Cerra 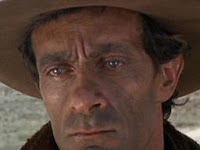 Sarturno Cerra was a mystery to me for many years. Although I had seen his face in many of the Spaghetti westerns I did not know his name. Many of his films were just generic outlaws and other supporting roles where he was seldom if ever called by name. It wasn’t until he was honored at the Almeria Western Film Festival in 2011 was I able to know much about the man.

Born in Ucio, Ribadesella, Asturias Spain on November 25, 1924 he went to work as a bricklayer after the end of the Spanish Civil War. He liked to paint and but he lacked pencil and paper so he entertained himself by drawing figures with the masses of cement and sand that he surrounded him each day at his work. He emigrated to Madrid and got a job in Galerías Preciados, an establishment founded in 1943 by the Asturian Pepín Fernández. He became a star employee to the point of reaching an average of seven million pesetas a year. But Madrid and the misery of a post-war Spain generated so many concerns that Cerra decided to emigrate.

He made a pilgrimage to the embassies of Canada, Mexico and Australia, where he was denied a visa to enter the country until he could be claimed by a company or family. One day he knocked on the door of the Brazilian delegation, where the doors were opened wide and in less than 24 hours he traveled from Barajas to Sao Paulo, a city where he did everything to be able to earn a daily wage.

A friend proposed to him to participate in the filming of a soap opera and later came an acceptable role in the film 'Dry Mist', for which he also designed the scenery. Money was scarce so he moved to the city of Santos, where he sold dozens of his paintings to a couple of Americans, who were coffee exporters and they were determined to buy all of his productions.

His first film was in a Brazilian telenovela, in the city of Sao Paulo, and then he went back to Spain in 1964 to visit his mother in Sebreño and a later trip to Madrid placed him on the path of Almeria and Sergio Leone. He worked on 'The Good, the Bd and the Ugly', although the first film of his Almeria stage was 'Seven Pistols for the Mac Gregors'. Cerra would go on to share the stage with such acclaimed actors as Clint Eastwood, Henry Fonda, Charles Bronson and Anthony Quinn and spectacular actresses like Sofia Loren and Claudia Cardinale.He would end up appearing in over a dozen Euro-westerns before retiring and in 2011 was honored at the First International Western Film Festival that was held in Almería. In Ribadesella he had become a regular golf practitioner in the Rasa de Berbes field, where his friends gave him a Stetson hat when he was 90 years old.