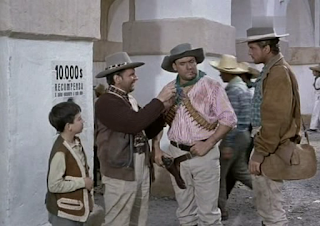 During the Mexican revolution the presidential palace is attacked and it is only thanks to the intervention of a sympathetic maid that the president’s son Jaunito is able to escape. After being mortally injured by an exploding bomb she is forced to ask the help of Tom, a German hunter who – unaware of the boy’s background – agrees to take him into his care. After escaping by train they head to his mountain hut where they meet with Tom’s friend and partner, Paddy. In the meantime the head of the army, General Vegas is desperate to find Jaunito and offers a substantial reward for any information that leads to his recapture. When Tom and Paddy discover the true identity of their charge they decide to do everything they can to keep him safe but, after being betrayed by a duplicitous Doctor, Juanito he is recaptured and they are locked up in a seemingly impregnable prison.