After 53 years, Mario Adorf has changed 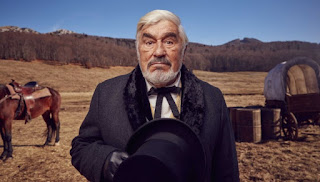 Santer is back! After more than 50 years, Mario Adorf roams the prairie again in the "Winnetou" - Remake - but not as a villain Santer, but almost.

For half a century, "Winnetou" fans had to be patient, now it's finally time: On Christmas day the three-part new film of the Karl May trilogy came into their living rooms. With only a few small changes.

53 years later the now the 86-year-old slips into the role of Santer again. But this time, the playwright plays the senior, father of Winnetou's evil counterpart Santer Junior (Michael Maertens, 53).

In 1963, Mario Adorf was on the scene for the first time for "Winnetou". At that time the native Swiss was 33 years old. Since then, more than 50 years have passed, and the list of his films has grown year after year. He has been involved in more than 200 productions.

In 1970, he played the violin as Bruno "Dandy" Stiegler in “Die Herren mit der weißen Weste” (The Men with the White Vest), 1973 Benito Mussolini in “Der Mordfall Matteotti”. Yes, many people know Mario Adorf as a filmmaker, but his repertoire is much bigger.

A Bambi for his lifework

In 2010, he was the enthusiast in “Der letzte Patriarch” (The Last Patriarch), also in the same year as a committed scientist in “Das Geheimnis der Wale” (The Secret of the Whales). His television roles in "Kir Royal" or "Der große Bellheim" are also unforgettable.

To this day Mario Adorf is regarded as one of the very big German actors. In 2016 the film legend was awarded the Bambi for his life work.
Posted by Tom B. at 5:50 AM