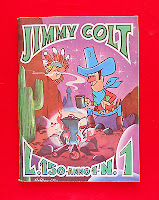 Jimmy Colt’s humorous adventures written by Paolo Di Girolamo and co-authored by Nino Orlich, with drawings by drawings Viro Le Rigny, Roveri (Lino Ray) and Mario Fantoni. Nine issues were published in Rome by Cerretti Editore from February 5, 1970 – March 19, 1970. Each issue was 64 pages long. There were also 2 reprints in 1973 as a supplement to El Santo. 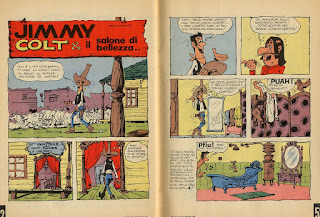 Paolo Di Girolamo drew for Italian comic books from the 1940s through the 1950s. He was one of the artists for the comic book series Albi Viaggi e Avventure and its supplements L'Albo Delle Domenica and L'Albo Della Donnina' by Editrice Taurinia from Turin in 1946-1947. He also drew the 'Superbambolo' feature for the monthly school magazine La Via Migliore around the same period.

By the 1950s, he was working for the publications of Sergio Rosi in Rome, drawing features like 'Il Conte di Valnero' for La Settimana dei Piccoli, and covers for the collection Albi del Quadrifoglio. He was one of the main artists for the sci-fi magazine L'Astronauta in 1957-1958, and his comic 'Il mistero di Tiahuunuco' appeared in the sci-fi anthology Anno 3000 Almanacco in 1959.

In the 1970s, he drew for the 'Jimmy Colt' a comic book by Cerretti Editore, the collection 'Serie Super Story' and SuperGulp! magazine ('L'Incontro de li Sovrani').