We continue our search for locations for “Gatling Gun”. The scene shifts from Tanner digging out the bullet in his hand to Ryckert, Tarpas and his men waiting impatiently for Bishop and Belle Boyd to arrive at the designated spot to exchange the Gatling Gun for the million dollar ransom. Finally two riders approach and Tarpas tells Ryckert to go get his million dollars. Ryckert and one of the henchman ride up dismount and Ryckert and supposedly Boyd approach each other on foot. When Ryckert recognizes it’s not Bishop by Tanner he opens fire but is shot in the return fire. Tanner kills the other henchman and the shooting becomes general. Tanner shoots down the rest of Tarpas’ men while Belle hides behind some rocks. Now only Tanner and Tarpas are left to face each other.

This scene takes place at Manzanares el Real. This location is seen in many Euro-westerns probably best remembered where Tuco is shot of his horse by the three bounty hunters who are in turn shot and killed by Blondie. 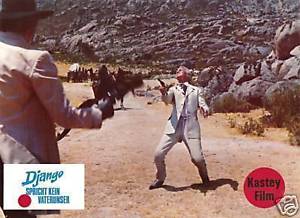