Rio Kid, better known as "Il Cavaliere del Texas", was the protagonist of a brief series arising from the joint work between Giovanni Luigi Bonelli, the script-writer, and Rinaldo d'Amy, creator of the Plot and the artwork. A typical "righter of wrongs", accompanied by the cyclopic Whisky Bill (whose nickname is extremely illuminating of his love for alcoholic beverages), Rio Kid has his adventures in the arid regions of Texas and Mexico, where the action-packed stories (as was traditional for G. L. Bonelli's characters) frequently transcend the boundaries of the purely Western genre and encompass themes from the realm of the fantastic. 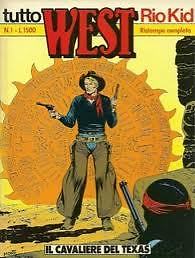 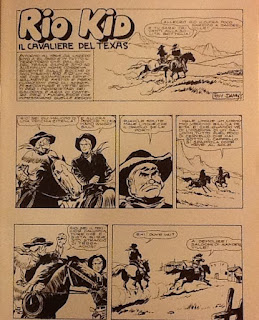 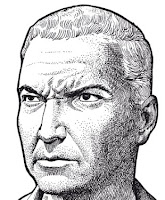 Giovanni Luigi Bonelli (December 22, 1908, Milan, Lombardy, Italy) was an Italian comic book author and writer, best remembered as the co-creator of Tex Willer in 1948, together with artist Aurelio Galleppini.

In 1948 he created Occhio Cupo and Tex Willer (both drawn by Galleppini). He wrote several early epizodes of Zagor (#6, 7, 8, 9, 10, 13, 14). Bonelli remained to supervise the production of Tex until his death. His son Sergio Bonelli was also a comic book writer, as well as the publisher of comics. 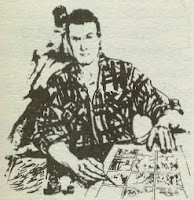 Rinaldo Dami (September 29, 1923 Vicenza, Vicenza, Italy) who was also known under the anglicized version of his name, Roy d'Ami, was a versatile creator of comics and the head of one of Italy's most prestigious art agencies of the 1950s and 1960s. Born in Crimson del Grappa, Rinaldo Dami was taken prisoner by the British in North Africa in March 1943. He was sent to a camp in Algeria, and then to the island of Malta. Upon his return in Milan in 1947, Dami started working in the advertising and animation field.

He drew his first comics in 1948, when he found work at the publishing company Cremona Nuova. There, he illustrated series like 'Blek e Gionni', 'Dixy Scott' and 'Il Piccolo Sergente', in a style influenced by Milton Caniff. During the early 1950s, he drew a great many western comics for Audace, including 'Mani in Alto', 'Gordon Jim', 'Il Sergente York', 'Cherry Brandy', 'La Pattuglia dei Bufalli', 'Il Ritorno dei Tre Bill', the Bonelli scripted 'Rio Kid' and 'Pecos Bill', scripted by Guido Martina. Later on, he created several strips for Corriere dei Piccoli, such as the humorous 'Scuterino' and 'Indianetto', as well as several scenarios for other artists, such as Carlo Porciani ('Davy Crockett', 'Haywatha'), Leone Cimpellin ('Nerofumo'), Paolo Piffarerio ('Apollo il Pollo') and Ferdinando Tacconi ('Moby Dick'). Also, he created 'Piccolo Bisonte' in Corrierino.