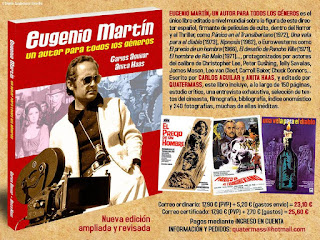 Carlos informed me this is a republished book under the same title as eight years ago, with more pages and an increased number of illustrations, including many unpublished photos. Various adjustments such as a new forward, since it deals with a significant gap in the bibliography of Spanish films, on the one hand, and, on the other hand, it prolongs his collaborations with Javier G. Romero, who he’s known for over 20 years.
Posted by Tom B. at 7:09 AM