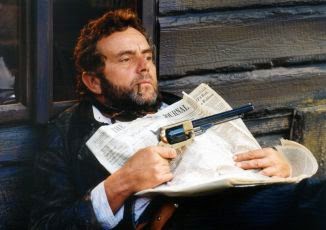 Residents of a small town for a long time have been plagued with Evil Jack. So far, no one else would stand up to him. The residents find glimmer of hope in the form of a feared gunslinger. Their hope is realized when Cowboy Bill returns to the village. In the meantime, Jack steals some cows and thanks to his clumsiness Bill end up at a local hospital.

Bill has therefore decided to rectify his reputation and decides to find a man who will stand up to Jack. Bill likes to read fairy tales in which knights have talking horses, and he regrets that his horse Lightning is silent. While reading one of his tales, Lightning suddenly speaks.

Bill with his horse Lightning sets off on a journey to find a gunman The Bowler Kida. But he discovers that his reputation as a feared gunslinger is not true. Finally, Bill defeats Evil Jack on his own and rids the village of the longtime tyrant.