Benny and Lenny in the Wild West (TV series) 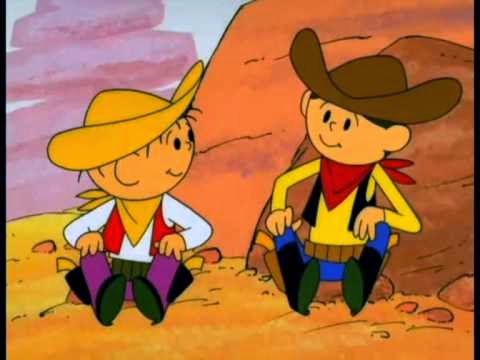 Bolek and Lolek are two Polish cartoon characters from the TV animated series by the same title (Bolek i Lolek). They are based on Władysław Nehrebecki's sons, named Jan and Roman, and were partially created by German-born Alfred Ledwig before being developed by Władysław Nehrebecki and Leszek Lorek. The series is about two young brothers and their fun and sometimes silly adventures which often involve spending a lot of time outdoors. They first appeared in an animated film in 1964.

The names of the two characters are diminutives of Bolesław and Karol. In English, the cartoon was distributed as Jym & Jam and Bennie and Lennie. Some episodes were seen as part of Nickelodeon's Pinwheel. In 1973 the creators of the film placed on the request from the female viewing audience a girl character by the name of Tola. The first time she appeared in occurred in the episode entitled "Tola". In total, Tola appeared in 30 episodes.

Of all the Polish animated cartoons Bolek and Lolek ranks as the number one all-time favorite. The series was popular in many countries, and was one of the few animated movies allowed to be broadcast by Iranian television just after the revolution of 1979.