Blood of the Hunter (TV Film) 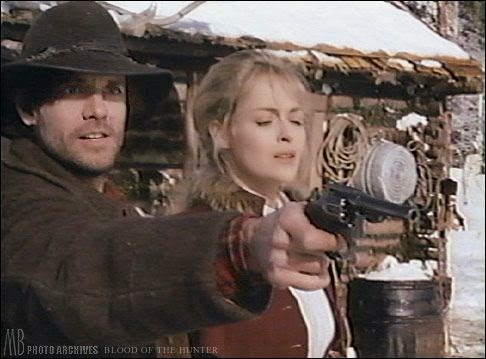 This TV film is one of the episodes in the French, Canadian co-produced mini-series called “Tales of the Wild”.

In this period thriller set near the turn of the century, Jan Thoreau is a Canadian trapper who lives with his wife Marie in a small community in the wilderness not far from Hudson Bay. Blake is a disturbed drifter who has murdered a man and has found a way to frame Jan for his crime. Jan is out tending to his traps when an Indian friend with psychic talents tells him Marie is in grave danger. Jan hurries back, but he has no idea just how serious matters are until he arrives home -- Jan is wanted by the law for a crime he didn't commit, while Blake is hiding out in his home, and has taken Marie hostage.

The film had a lot of potential featuring a great plot, wonderful location scenes and the dealing with both the Cree and Metis cultures. But it came across as very stilted with most of the drama lost through the poor direction of Gilles Carl. Michael Biehn and Alexandra Vandernoot are excellent but the rest of the cast are as wooden as the trees in the forest surrounding the production.