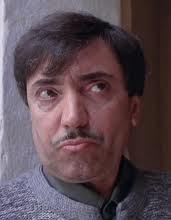 Last Friday, May 27, 2011 in Rome, the actor and voice actor Armando Bandini passed away. An excellent character actor, Bandini was born in Genoa on June 5, 1926 and as a young man joined the Theater Company of Gilberto Govi.
He divided his acting career between the theater, television and the cinema, and is one of the original actors who appeared in the drama "Saturnino Farandola", broadcast in 1977 on RaiDue, and as Don Carlino in the film "Don Camillo Monsignore ... ma non troppo" (1961), Bandini also worked in the cinema with directors such as Ugo Tognazzi, Alberto Lattuada, Dino Risi, Pasquale Festa Campanile and Carlo Lizzani until his last appearance on the small screen in 2005 with "Piccolo mondo antico" directed by Cinzia Th Torrini,

Armando Bandini, was married to actress Danielle Igliozzi, also voiced several cartoon characters, loaning his voice among many such as Barney Rubble in "The Flintstones," Grandpa Cortes in "Belle e Sebastien," Rigel in "Atlas UFO Robot", Chingensai in "Ranma ½", Chin-Fu in Disney's "Mulan" and the doctor in the animated film "The Rescuers in the Land of Kangaroos" between films he dubbed the actor Garry Bamman (Uncle Frank McCallister) in "Mamma, ho perso l’aereo" e "Mamma, ho riperso l’aereo - Mi sono smarrito a New York." Many will remember him as the Italian voice of little Tattoo (Herve Villechaize) on the TV show "Fantasy Island". Bandini appeared in one Euro-western "Ace High" (1967) playing the bank cashier.
Posted by Tom B. at 6:15 AM