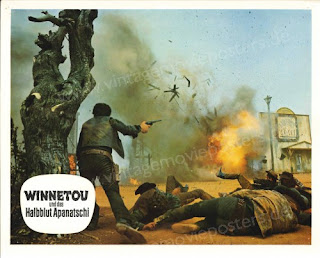 Winnetou rescues a small boy named Happy, when he climbs into an eagle's nest to get a feather for the birthday of his sister Apanatschi and is attacked by the eagle. Apanatschi is the daughter of the farmer Mac Haller and the Apache Indian Mine-Yota, she is a half blood. This is no obstacle for impetuous young Jeff Brown, he wants to marry her.

Mac Haller shows Winnetou and Apanatschi a gold mine and gives it to Apanatschi for her birthday. Apanatschi is not thrilled, because she knows that gold brings only misfortune. And indeed two trappers Pinky and Sloan learn of the gold and Mac Haller is murdered. Happy and Apanatschi escape only because Old Shatterhand arrives in time. The two outlaws are brought to the safety in the railway workers' camp of the Transcontinental Railroad (TCRR), and Old Shatterhand rides on to Rocky Town, where a bandit gang is creating mischief led by Curly Bill.

Sloan and Pinky are henchmen of Curly Bill and learns of Apanatschi gold. He leads his bandits on a raid of the railway camp. They kidnap Apanatschi and Happy and take them to their refuge, a seedy saloon. Jeff manages to sneak in aa "magician" and in a short time gains the trust of the bandits. By a trick he gets the key for the room where Apanatschi and Happy are held, and with the help of the landlady, Bessy, they are able to escape through an underground passage. Apanatschi is now brought to the Kiowa Indian camp and safety.

Old Shatterhand has been mobilized to train workers, and together with Winnetou, attack the bandits in their saloon in Rocky Town. Some of the bandits manage to escape and Curly Bill wants Apanatschi kidnapped again, but is only able to capture Happy. Winnetou offers himself in exchange as a hostage and takes the bandits to the gold mine. Judge, Curly’s right-hand man shoots his boss and makes himself the new leader.

The bandits load their horses with gold and return to Rocky Town. Shatterhand and the railroad workers fill a tunnel under the city with dynamite and, on the arrival of the bandits they blow up everything. Judge in his flight is overtaken by Shatterhand and a locomotive. The rest of the gang are taken care of by the Kiowas under the lead of the Iroquois. Apanatschi gives the remaining residents of Rocky Town her gold for the reconstruction of the town and moves with Jeff into the old log house of her late father.

YouTube link: http://www.youtube.com/watch?v=4RDnhQf4JSE
Posted by Tom B. at 6:45 AM