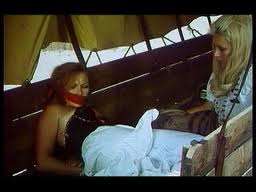 The Hooker gang prepares to rob the bank of a small town in the west. The operation goes awry and turns into a pitched battle with the inhabitants of the town. The shooting leave a lot of people dead, but the survivors of the gang manage to flee with the money and two hostages: Gilda a prostitute, and a young girl named Nell. Nell is none other than the daughter of Burke Malloway, an ex-Army Ranger. With his talents, Malloway soon finds the trail of the fugitives, while the sheriff with his posse are also involved in the search for Hooker. The outlaws, after finding refuge in the brothel of Gilda, who turns out to be a widow of a notorious bandit, have no alternative but to flee to the Mexican border to escape the men who stalk them

[Originally released in 1974 it was re-released as "Sweet Sierra" in 1979 with additional footage added by Bob W. Sanders (Robert Renzulli)]

YouTube link http://www.youtube.com/watch?v=zyH5UVSXVT4
Posted by Tom B. at 6:11 AM