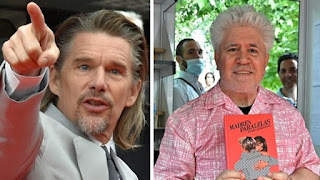 Pedro Almodóvar will shoot in Tabernas in August: Ethan Hawke confirms his presence

The American actor Ethan Hawke ('The Dead Poets Club', 'Before Dawn', 'Gattaca', 'Boyhood') has confirmed that he will be one of the protagonists of 'Strange Life', the short western that Pedro Almodóvar is going to shoot on locations in the province of Almería.

"I'll be in Spain soon, I'm going to shoot with Almodóvar", announced the journalist Gonzalo Franco , from the 'ecartelera' website, during a promotional interview for his latest premiere, the horror film 'Black Phone', which has arrived this weekend in the Spanish theaters.

Although there is still no official confirmation , Hawke would be accompanied in the cast by Pedro Pascal ('Narcos', 'Wonder Woman 1984', 'The Mandalorian'): the Chilean actor complicitly cited his colleague and the Manchego in a comment on Instagram to an interview of 'Fotogramas' in which Almodóvar assured that he had already chosen the actors for this project .

“They are two pieces of protagonists although El Deseo [the production company he created with his brother Agustín] forbids me to say more. He banned me in Hollywood and he banned me here but you'll find out soon enough, as soon as the contracts are signed. They are two very good actors”, he stated at the Fotogramas de Plata gala, where his latest film, 'Madres paralleles', was awarded the best Spanish film.

In this way, while advancing in the pre-production of what will be his first feature film in English - 'Manual for Cleaning Woman', which he will shoot with Cate Blanchett-, Almodóvar will visit Almería this summer to shoot for the third time in his career.

It will do so in the Tabernas Desert, possibly using the Western Leone town as a location, built for the filming of 'Hasta que llegó su hora' at the end of June.

As LA VOZ has learned, the director of 'Todo sobre mi madre' was already at the location at the beginning of the year. The preparation work for the filming of the short film is scheduled to begin in July and the filming will take place, if everything goes as planned, during the month of August.

Almodóvar  revealed at the Venice Mostra in 2020  that he had written a short western with the title 'Strange Way of Life', as well as a fado by the Portuguese Amalia Rodrigues. “I want to shoot it in Almería, where some of the sets where Sergio Leone and many others filmed are still preserved”, he said then during an interview with Julia Otero.