What happened to Terence Hill, the inseparable companion of Bud Spencer

Mario Girotti, an Italian actor of German origin, was, together with his great friend, an indispensable figure for understanding the spaghetti western and is still active. 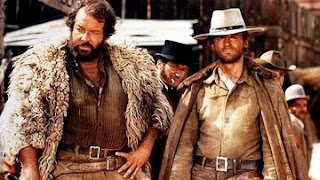 Rarely in the history of cinema have two actors been as closely linked as Terence Hill and Bud Spencer. But Mario Girotti and Carlo Pedersoli, their real names, formed for more than two decades one of the most prolific couples in the film industry whose career would not be understood without the subgenre they helped build: the spaghetti western.

The glory of its genesis and definitive takeoff may fall on Sergio Leone and his successes For a Fistful of Dollars (1964), Death Had a Price (1965) and The Good, the Bad and the Ugly (1966), with Clint Eastwood acting to the tune of Ennio Morricone , but it is no less true that shortly after Enzo Barboni reinvented the genre with the film They called him Trinidad (1970) , where the actors Terence Hill and Bud Spencer explored a more comical, picaresque and less violent side unknown until now. so.

The end of a friendship

Their on-screen partnership didn't survive the turn of the century, but their friendship did until Bud Spencer's death in 2016 at age 86. A hard blow for his inseparable companion. In 2010 both received the honorary David de Donatello award, showing off the excellent relationship they always maintained. "We have never argued," said Bud Spencer at the time. "We respected and loved each other," Terence Hill shared at his friend's funeral.

There is no doubt that Mario Girotti's career will always be marked by his professional relationship with Carlo Pedersoli, but there was a before. And there is also an after. Of this actor born in Venice, although raised in Dresden (Germany), perhaps few know that in his early days he had a small role in El Gatopardo (1963) by Luchino Visconti. And not everyone may be aware of his success on Italian television thanks to Don Matteo, a fiction that has been broadcast for more than 20 years.

The same fiction that helped him definitively leave behind the depression caused by the death of one of his sons in 1990 after a traffic accident. The same fiction that helped him cope with the death of Bud Spencer and that keeps him active at 83 years old. And it is that the adventures of the priest of a small Italian town with detective skills have already reached their thirteenth season with no signs of exhaustion.

It is possible that any past time was better for the German-born Italian actor, but today he is an institution in his country, where he is loved and respected in equal measure. He no longer acts as a rogue or travels to the mythical locations of Almeria, but there is no doubt that he is reluctant to hang up the habit.