Who Are Those Singers & Musicians ~ John Campbell 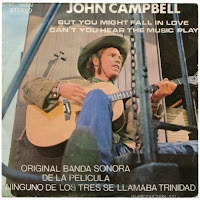 Jon Campbell was a member of the Penobscot tribe of Native Americans in Maine, who was born in Maine in 1951. He was a singer, songwriter who also worked in films, as a grip and with pyrotechnics. He was a self-taught mixed-media artist “skilled at jewelry, metal working, stone cutting and painting.”

Campbell was inducted into the Rhode Island Hall of Fame in 2019 and died in Charlestown, Rhode Island on January 9, 2022.