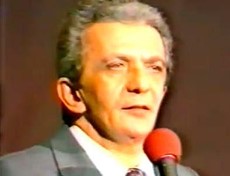 Rogelio Hernandez Gaspar was born in Barcelona, Spain on Christmas Day, December 25, 1930. In 1960 he settled in Barcelona, ​​where he began a long career as a dubbing actor that lasted almost half a century. In the 1960s, Rogelio would was requested to double actors of the stature of Marlon Brando, Paul Newman, Michael Caine and Jack Lemmon, actors whom Rogelio would continue to double during the following decades, especially the first three. He would also double for actors like Errol Flynn, Cary Grant and Montgomery Clift .

In the 1970s and 1980s, in addition to dubbing Caine, Brando, and Newman, he lent his voice to supporting cast, such as Bruce Dern, Roy Scheider, James Caan, and Robert Duvall. He highlights his dubbing of Peter Sellers, the comic Inspector Clouseau in the Pink Panther saga .

In 1981 he began to double for Jack Nicholson in the film noir thriller directed by Bob Rafelson The Postman Always Rings Twice, thus becoming another of his regular actors until his retirement (he doubled for him 18 times). He was also the voice in Spanish of the famous serial killer "Scorpio", played by Andrew Robinson in the 1971 thriller Dirty Harry, by Don Siegel and starring Clint Eastwood.

On February 1, 1986, Rogelio Hernández was honored in Barcelona at the Golden Lecterns ceremony of The Great Night of Dubbing, where he received a Lifetime Achievement award. In 2007, after serious vision problems, Rogelio retired from dubbing after having taken part in the dubbing of more than 1,500 films. He passed away on December 31 2011 at the age of 81 from kidney cancer .

His wife, Rosa Guiñón and his daughter Rosa María Hernández are dubbing actresses.