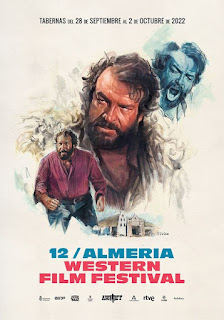 The legendary performer shot dozens of films with his partner Terence Hill (AWFF Film Tabernas winner in 2016) over the course of thirty years. The two actors managed to represent great portrayers of the western for all audiences that brought the genre closer to several generations. As well as recognizing him, Bud Spencer stars in the poster for this edition, a work designed by the prestigious Italian illustrator based in Berlin Tony Stella. It is a tribute to the Italian posters of the 60s and 70s with the memorable face of the actor. Stella is a declared fan of the 'spaghetti western' and has worked illustrating posters for prestigious directors such as Wong Kar Wai, Francis Ford Coppola and Quentin Tarantino. The his paintings, which range from watercolors to gouache inks, have become an international reference.

The Festival has awared the 'Leone in Memoriam' award in previous editions to professionals such as Fernando Sancho (2016), Tomás Milian (2017), Carlos Simi (2018), George Hilton (2019), Sergio Sollima (2020) and Ennio Morricone ( 2021). All of them have a prominent plaque in the cemetery built for these distinctions in the western town of Oasys MiniHollywood.