Who Are Those Guys? - Nicolas Boulifard 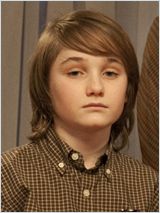 Nicolas Boulifard was born in France on February 28, 1997. Nicolas was a child actor who seems to have pursued a normal life of school and social activities with acting as a sideline. After his initial film, the Euro-western “Big City” where he portrayed the Little Comedian he hasn’t appeared in anything other than and two appearances in “Borderline” and “Pure Affaire” both in 2011. Possibly once his studies are finished he will return fulltime to an acting career or go on to pursue other adventures in life.