Who Are Those Gals? - Ornella Boul 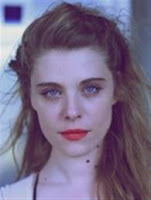 Ornella Boulé is a French actress. She took dance lessons at a young age and then began modeling. After graduating at the Conservatoire Nationale Superieur d'Art Dramatique in 2008 Ornella Boulé; was signed by Chantal Philippart at the AML agency. She has since then worked in France on stage and in both cinema and television. While she was still training at CNSAD, she was lucky enough to have be chosen among thousands of young actresses all over the world to be featured in the Kayne West Flashing light's video clip directed by Martin de Thurah. She had her first leading role in a French film shortly after graduating from school, Fouad Benhamou's “The Village of Shadows”. Since then she has been busy on stage in Paris and has part in a couple of several independent films and two episodes of the TV series ‘Direction générale de la VDM’.