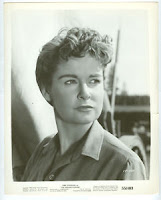 RIP Diana Douglas. Diana Douglas, ex-wife of actor Kirk Douglas and mother of Michael Douglas died of septic poisoning at the actors home in Woodland Hills, California. She was 92. Born Diana Love Dill in Devonshire Bermuda in 1923 she was married to Kirk from 1943-1951. She appeared in several western films and TV series including the The Indian Fighter (1955). Her only Euro-western was 1977's Another Man, Another Chance, playing the role of Mary's mother.
Posted by Tom B. at 2:25 PM