Bud Spencer: "I was never an actor"

Along with Terence Hill he formed the most popular film couple of the Italian cinema of the 1970s and 1980s, but before that he was an Olympic swimmer and a car salesman. Now he launches his memoir.

Budweiser beer lover and follower of Spencer Tracy, Carlo Pedersoli (Naples, 1925) with a scratch preserves is almost two meters tall and 140 kilos of history, kindness, humor and generosity. Every day, at his home in Rome, he receives hundreds and hundreds of letters from all over the world asking for a response or a signed photo. Fans who added to their requests the money to the myth not spend a lyre on stamps. Just over a year ago he was about to die, but as fate would have it he was allowed to live again. Or rather, never stop. His breathy voice is reconstructed with its own silences, intuitive and biased. His infinite and exaggerated hands do nothing but deepen the beautiful irony of his life: Bud, in English, means rose petal.

Let's start from the end. You are singer and writer. Lasciatemi go (Let me go) is his latest book. What is meant by the title?

I’ve lost some memory, but I'm already on my fourth book. What I want is to be left alone, because everyone always tells me to do something. I believe in the eternal father, and when he has to come my time will come. But I do not want you to ask me to reach incredible heights, because I'm a normal guy. I feel that stands in the way, my way. You included. I'm just a beginner, nothing more. I need peace.

Everyone was wrong about you, then. Even those who still believe that he is American. Is it a matter of ignorance?

No, but the truth is that I have many films in Spain with American actors. But I think now, with 86 years, you know that I was born in Naples.

Did you miss Naples?

No, although I do feel very Neapolitan. Unfortunately, little remains of what I left there. It was great, but I remember that I suffered a lot because I lived during the war, the bombing; and then in Rome something similar with the slaughter of San Lorenzo. I recently picked up the award of Honorary Citizen by popular demand, but everything is different. The harshness of these times leaves its mark ... Then we went to Brazil, Venezuela, Argentina, which was in full revolution. They hated the Americans, and I was confused with being one of them and had to carry ID that mad it very clearly that we were Italians

Yes, I participated in Helsinki 1952 and Mexico 1956. I was the first Italian to lose a minute and think twenty times won the championship of Italy. Even my friend Tarzan (Johnny Weissmuller) congratulated me several times. It was incredible, but I won. I was selected to play with the water polo champions of the world, although I was not involved in that feat.

20 years of being an athlete until you entered films at 37, perhaps too late. How did you convince your father?

I married Maria Amato, my guardian angel, 56 years ago. It was her father (Giuseppe Amato, producer of La Dolce Vita or Don Camillo) who suggested me. I started when he died, and my first film was in 1967 (God Forgives ... I Don’t). They needed a big man, and although at first we agreed on an economic issue, they finally relented and accepted when they could find no one my size.

It was his debut as an actor, because he had previously worked in Quo Vadis ?, A Farewell to Arms and Four Flies blue velvet, with Dario Argento. They were not your thing these genres?

I was part of a troupe, but it is that which followed that was to make me an actor, nothing else. Terence Hill really is an actor, because he studied, had even worked before we met. That is why we have never discussed, even though all couples do film. He acted; I was just a presence. He is filming three movies a year trying to always learn something new from each.

Mario Girotti (Terence Hill) rolled 16 films. And to think that it was all a coincidence...

I was going to shoot a movie with Peter Martell, but the day before he suffered an injury that prevented him from doing it. So the film makers quickly sought another person. They chose Terence, who had worked in The Leopard, and then he was working with Rita Pavone. From there began a relationship which is still alive. There was never a clash of egos, because he was an actor and prepared. I was always a beginner.

Reviewing the Trinity trilogy I have a question, are you kind and stingy like in the movies?

The only thing I ever wanted to capture in them is something that I struggle in real life: ending injustice. My violence was always funny. He was the executive arm of all those minds who wanted to and cannot rebel against the atrocities against their boss at work.

Have you been back to the desert of Tabernas (Almería)? It does not have the glamor of Arizona or Utah, but cheaper out.

I returned to Madrid and Barcelona, ​​but not to Almería. There was nothing then. I remember we had to catch a train from the capital that never happened. It was the end of a yet sparsely populated Spain. Of course, its people were extraordinary, magnificent, true, kind, sensible, friendly, unique. Now, as in Italy, there is much difference between north and south. Also I shot a lot in Africa, but Spain was wonderful, affordable, economical and nearby.

Did you know Fernando Sancho?

Number one. I also did something with him in South America. The best of its kind without any doubt. He was valued very highly.

His westerns were all bent because the tower of Babel that made actors, directors, filmmakers and producers. Do you know that in Spain was twice José María Blanco?

I did not know, I did not know it. Honestly, I lost some memory and cannot remember if I ever met him. Of course, I could speak in any language, because I mastered many languages.

In Italy is an art dubbing. The great Ferruccio Amendola was as important as some world famous actors twice (Al Pacino or Robert De Niro). After his death, nothing was the same in the belpaese.

It is true that both here and in Germany still prevail large schools with excellent dubbers. In Italy, Glauco Mauri dubbed me.

If Sergio Leone was the father of the spaghetti western, the director and screenwriter Enzo Barboni he was the inventor of comic western. Did he think it would be so successful?

It was a world invention. The type of the West where there is no blood, no one dies ... And there are many, many smite. He thinks no one wanted to do this film, because they saw his future. The Trilogy of Trinity, for example, was rejected by many producers reduced because of excessive dialogue and little action. Zingarelli was the only one willing to risk. I also tell you that, over time, the success has been increasing.

And so did the soundtracks. Ennio Morricone was (and is) the Eternal God, but Franco Micalizzi was known and has had a more than acceptable future. He even composed some scores for police films with Tomas Milian (Roma a mano armata). Did he like your songs?

I did not understand music and did not know if it was good or bad. Every day I got out of bed and did what they said without looking around. I cannot judge anyone.

Terence, who keeps rolling on northern Italy today, worked with Leone, but you never. Did he ever propose anything?

I do not remember, but I do not care. He thinks we were not as famous earlier as we are now. I enjoyed what I've done. And Terence, too, I guess. Occasionally he comes home to Rome.

Are they eating beans in tin kettles?

No, those that we ate were only in the movies, with the heat of Almeria.

Would you have liked to have worked for big directors like Peckinpah or the classics, Ford, Walsh, Hawks Huston?

No not much, really.

And Tarantino? His black humor, irony and sarcasm fill a lot of his films.

I know. I saw some of his films, and I liked them. But I hate one thing that confused us as spaghetti western actors getting into the same basket as those who worked with Leone. We develop something unusual, never seen until now. The comedy brought to the far west

Have you ever coincided with Clint Eastwood?

No. We had several hours of shooting. I never saw him, honestly. Now you ask me this question, look back and maybe yes, eventually I became an actor by repeating many times the same.

Is Neapolitan, the land of artists: Pino Daniele, Curzio Malaparte, Eduardo de Filippo, Toto, Troisi ... Some of the main Italian songwriters (Domenico Modugno or Lucio Dalla) composed some songs in this dialect because it is what comes closest to poetry, to perfection. They did it even without being born there How do you feel about them?

I was a beginner, also in music.

I guess also in politics as I failed when I appeared at Berlusconi's bid in 2005. When realized he did not like this world?

The same day I showed up, but I do not regret having done so. My philosophy of life is futtetinne (Neapolitan dialect), meaning that almost all the same to me. When events happen you cannot avoid. There are two or three things that have no solution in life. The rest, yes.

Were ever was a fixture in the Via Veneto to live La Dolce Vita Rome?

I worked opposite the Café Paris (frequented by Fellini). He did it in a clandestine business where I had to sell cars, but I was only one that did not fit anymore. There I was; Hollywood in front of the Tiber.

Always away from the lights, the bustle, the frivolous and empty bourgeoisie as Alberto Sordi. 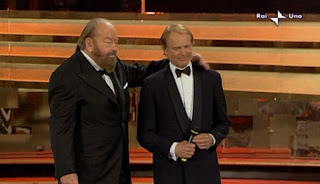