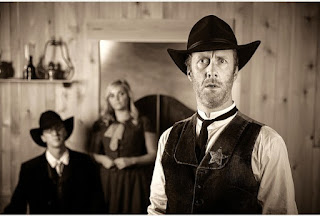 MIRACLE Theatre's new open-air show, The Magnificent Three, written by Bill Scott with music and songs by Tom Adams, will be touring across the wild south west from Friday and promises to be a must-do summer activity.

Each year, thousands of people enjoy Miracle's offbeat humour-fuelled shows, suitable for all and performed in stunning locations across the region.

Heading west across Dead Man's Prairie, the trail hits a watering hole called Hope Springs. Not a lot ever happened there: mostly lonesome strangers, minding their own business, passing on through but then word got out that the railroad was coming and the town got a whole lot wilder. Seems even most trusted folk can't always be counted on when there's money to be made ....

When times are bad, salvation can show up in darned unexpected shapes. No one in Hope Springs will ever forget The Magnificent Three.

"What better genre for an open air Miracle show than the Western, with its wide open spaces, high drama, larger-than-life characters and cheesy songs – not to mention vast herds of buffalo," said Bill Scott, artistic director of Miracle.

"A childhood spent in the company of the Lone Ranger and Saturday mornings lost in endless third-rate black and white B movies has equipped me with an arsenal of overused clichés and worn-out storylines which have found new life in The Magnificent Three."

Not only will Miracle be popping up in a handful of new venues this summer they are also going to be putting down roots for a series of Wild West Weeks where they will be offering an extended programme of free workshops, special offers, showboats and Hoedown Fridays.

For more details and July / August dates see www.miracletheatre.co.uk
Posted by Tom B. at 5:51 AM