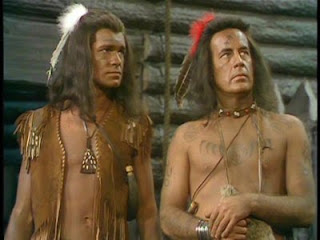 In 1758 in the vicinity of New England and Lake Ontario. Mabel Dunham, known as Magnet, is the daughter of Sergeant Dunham who is stationed at Fort Oswego. When her mother dies, she tells her Uncle Cap, a retired sea captain, that she has decided to join her father at the fort and enlists the services of an Indian named Arrowhead and his squaw. Dew of June, to guide them. Meanwhile, in the Fort Oswego area, Pathfinder, the scout, his trusty Mohican friend, Chingachgook, and another guide, Jasper Western, learn that the French are planning to attack Fort Ticonderoga. When they go to Fort Oswego to forewarn the troops, they learn from Seargeant Dunham that Magnet and Uncle Cap are on their way. They move swiftly to join Cap and Magnet as additional guides on the dangerous trip. But the plot thickens when Arrowhead, Pathfinder and Jasper all fall in love with Magnet and Arrowhead disappears to meet with Mohawk warriors planning to ambush the little party.

This British TV mini-series was a sequel to the BBC mini-series “Last of the Mohicans” and featuring the further adventures of Hawkeye and Chingachgook.

The Mini-series consisted of five one hour episodes. Where “Last of the Mohicans” received rave reviews and awards this follow up was regarded as dreadful and one of the worst mini-series in BBC history.