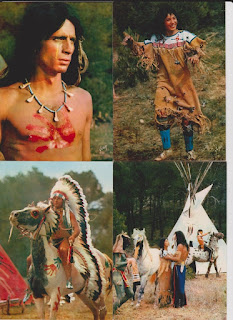 The young Indian Mato wants to marry the Indians girl Wany, but her father, chief Tanka, vetoes the proposal. Mato is captures a horse from an enemy tribe and makes him a gift, and the chief reverses his reservations and gives his daughter to be the wife of Mato. Now Mato and Wany travel after their marriage on a great trip. Move recognizes Mato rides after them to warn them that Warapa, the chief of the enemy tribe, is on the warpath to get revenge on Mato for stealing the horse. Mato keeps track of Warapas and his warriors, riding toward the camp of his tribe. But the enemy chief falls victim to a trick. The young honeymooners fabricated by smoke signals a call for help near Warapas stock. The enemies gallop in their camp, which they believe is in danger, and leave their horses stand. Matos prank is fully managed. He finds the horse, as he suspected, in a large forest.

The popular director Pierre Viallet told in this French Western series, the story of the Indian Mato, represented by Alain Emery ("The White Stallion"). The two main roles of the Redskins were filled with real Indians. The film was shot in the Camargue, which is one of the most beautiful landscape conservation areas of France. The production itself and its accompanying soundtrack were a great success in Germany. “The Indians” was a French television series of 26 episodes of 13 minutes in length which appeared on French Channel 1 in 1964.