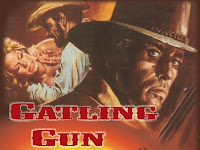 We begin our search for locations for “The Gatling Gun” starring John Ireland and Robert Woods. The film opens showing two guards patrolling a wooden barricade of what was once a fort now laying in ruins. Below several men are playing cards. Suddenly a voice heard exclaiming, “Hey! There’s a wagon coming in!” The card players jump to their feet and run to the approaching covered wagon. A man named Mr. Pinkerton appears from a dilapidated building as one of the men tells him, “They got here. It looks like they had a bad journey”. Pinkerton climbs into the front box of the wagon and asks the driver, named Chris, “What happened”. Chris obviously distraught and barely conscious looks at him and says nothing. When Pinkerton asks where’s Wallace, Chris replies that Wallace and Curtis are dead.