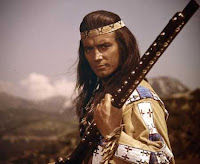 French actor Pierre Brice, known to all western fans as Winnetou, died in a Paris hospital today June 6th of pneumonia. He was 86 years old. Brice was born Pierre Louis Baron de Bris on February 6, 1929 in Brest, Brittany, France, became famous in Germany as "Winnetou".  The novel hero of Karl May was the role of his life. In the 1960s he played him a total of eleven times.  His first appearance was born in1962’s "Treasure of Silver Lake".  Ten million people saw the film in Germany alone. The film series ended in 1968. In his native France Brice was hardly known.  The connection to Germany was tight, not only because of its many fans, his wife Hella comes from Bavaria.
Posted by Tom B. at 6:38 AM