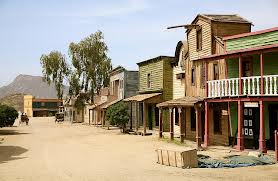 Continuing our search for film locations for “Death Rides a Horse”. Walcott and his henchmen rob his own bank killing the two guards. They blow up the safe and entrance to the bank making it look like it was an attack by an unknown gang. After leaving town they dump Ryan along the trail. The posse finds Ryan and arrest him as a member of the gang that robbed the bank.

The location of the bank robbery is Texas Hollywood / Fort Bravo which today is a tourist attraction in Tabernas, Spain

For a more detailed view of this site and other Spaghetti Western locations please visit my friend Captain Douglas’ excellent website: http://www.western-locations-spain.co
and Yoshi Yasuda’s location site: http://y-yasuda.net/film-location.htm
Posted by Tom B. at 6:49 AM