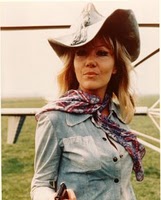 Ingrid Pitt, a Holocaust survivor and one of England's best-known horror film stars, has died. She was 73. The actress collapsed last week while on the way to a birthday dinner. The Belfast Telegraph reported Wednesday that her daughter Stephanie said Pitt died of "heart trouble."

Hammer horror movie historian Marcus Heam said of the actress: "Underrated as both an actress and a writer, Pitt was a warm but stubbornly enigmatic figure," Reuters reported Wednesday.

Known for her roles in Hammer horror films such as "The Vampire Lovers" and "Countess Dracula," Pitt also had a minor role in 1973's "The Wicker Man."

Born to a mother of Jewish descent, the Polish-born Pitt was sent to a Nazi concentration camp at the age of five. She survived the war and joined the Berliner Ensemble, but on the night of her planned stage debut she made the decision to flee Communist Berlin by diving into the River Spree. She nearly drowned in the incident, but was rescued by a U.S. lieutenant, whom she ended up marrying. After her marriage disintegrated, Pitt moved to Spain, where she starred in her first films. She went on to become a principle figure in British cult horror films.

Pitt was also a writer. She penned two novels set in Peron-era Argentina along with several horror-related pieces of fiction. "It's great meeting the fans," Pitt said on her fansite once, according to AP. "They tell me that I am more beautiful now than when I was making films a quarter of a century ago. All lies, of course, but sweet." "I was in a concentration camp as a child and I don't want to see horror," Pitt said. "I think it's very amazing that I do horror films when I had this awful childhood. But maybe that's why I'm good at it."

Pitt is survived by her husband, daughter, granddaughter, and ex-husband.

Author Tony Williams told me he interviewed Ms. Pitt ovr 30 yers ago and she told him she had appeared in several Spaghetti westerns but did not think any of them were very good and could not remember any of their titles. She once told a FanExpo audience she had appeared in 7 Spaghetti westerns, most with Tomas Milian but again could not remember any of the directors or titles. Obviously she must have gone uncredited or billed with an alias.
Posted by Tom B. at 7:25 PM