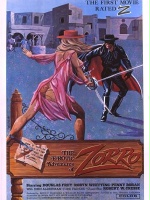 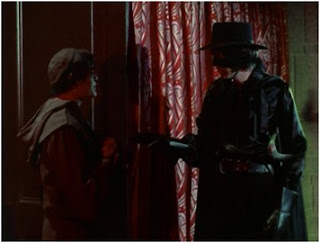 Luis Bonasario is collecting taxes and the villagers are complaining that they don’t have the money. The next thing you know a guy gets killed and Don Alejandro de Vega’s father is lamenting how terrible the living conditions have gotten in Los Angeles and that Bonasario needs to be dealt with

Don Diego arrives in Los Angeles and is told about the tyrannical rule of Bonasario. Diego immediately comes up with a plan on how to deal with the Alcalde.

He turns himself into a fop, riding a donkey and carrying a white parasol with him wherever he goes. As Zorro he rescues two young women who were taken prisoner on tax day.

Zorro challenges Esteban to a duel the following day by Don Diego shows up instead and Esteban puts two and two together and figures out they are one and the same person. The two have a sword fight ending with Esteban receiving a shoulder wound and saying he’ll never be able to fight again. Zorro tells him he’ll be alright and it’s better to be a lover than a fighter.

Between encounter with Bonasario’s soldiers our fearless hero has several sexual encounters before ridding the pueblo of the evil tyrant and returning it to it’s sleepy village status.
Posted by Tom B. at 6:56 AM