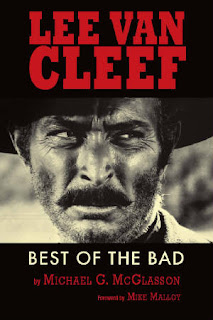 He had the face of a true villain, chiseled to perfection. Director Sergio Leone, best known for "The Man With No Name" spaghetti western trilogy, once described Van Cleef as having the face of a hawk; actor Eli Wallach called it "wonderfully alive" and full of wickedness. As an actor, Van Cleef portrayed some of the best movie villains of all-time Angel Eyes in The Good, The Bad, and The Ugly, and Frank Talby in Day of Anger. Although more than twenty years have passed since his premature death in 1989, Lee Van Cleef remains a cinematic icon for millions of film fans worldwide, and his legacy as the "Best of the Bad" is set in granite.

Lee Van Cleef: Best of the Bad explores the life and career of this great actor, a man with unbounded talent and a heart of finely-polished gold. Through interviews and numerous sources, Best of the Bad reveals the real Lee Van Cleef and discusses his roles in For A Few Dollars More, The Good, The Bad, and The Ugly, and Day of Anger, along with chapters on mythic archetypes and historical gunfighters and bounty hunters.

Also included is a foreword by Mike Malloy, author of Lee Van Cleef: A Biographical, Film, and Television Reference. $14.95 available from amazon.com
Posted by Tom B. at 6:40 AM