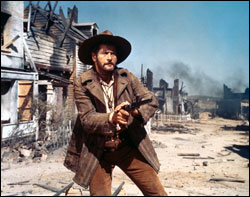 Had Eli Wallach accepted the Maggio role in "From Here to Eternity," he might have parlayed his Broadway leading roles into full-fledged Hollywood stardom. (And we'd probably be talking about "Frank Who?") Instead, he merely turned himself into one of the preeminent character actors of our time.

His portraits have run the gamut from Latin American dictators to Cambodian warlords, but the Brooklyn boy has always maintained his affinity for the types of his old neighborhood. Bursting out of the Actors Studio, he explored two facets of Italian machismo as the passionate seducer of "Baby Doll" and a lonely widower in "The Misfits," holding his own with seasoned pros Malden, Gable, Monroe and Clift. A brief role in "The Magnificent Seven" only interested him when he realized how often the bandit chief was talked about by everyone else -- and he rides off with the movie.

Two years later, a playful but sinister index finger "bang" aimed at George Peppard's kids in "How the West Was Won" prompted Sergio Leone's overseas call, offering what would be his signature role.

Tuco Ramirez in "The Good, the Bad and the Ugly" is an irrepressible, unforgettable Sancho Panza gone bad. Whether baiting, torturing or cringing before Clint Eastwood's white knight Blondie, he maintains his snaggletoothed integrity and an unquenchable lust for life. Six shooter hanging from his neck like a Commedia dell'Arte phallus, he's not without exquisite wisdom, as in this exasperated advice to a hesitant enemy he plugs while soaking in a bath: "When you have to shoot, shoot. Don' talk."

Consistently returning to the stage with luminous acting- and life-partner Anne Jackson, his roles large and small generally make audiences say, "Oh, the best thing in it was Eli Wallach" (most recently, the "Wall Street" sequel). In Nancy Meyers' "The Holiday," where he plays a legendary Hollywood scribe, someone asks whether he's always been feisty. Arthur/Eli replies: "I may have slowed down a little, but yes. You gotta fight the fight, kid."

Wallach has never stopped fighting the fight, and American cinema is the richer for it.