Who are Those Guys? - Don Backhurst 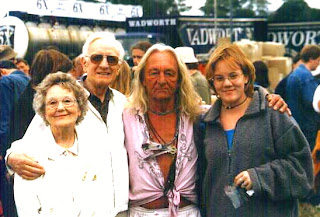 [Don Backhurst is pictured second from right]
Don Backhurst was born in 1925 in Cranleigh, England. Don grew up in Normandy and Stoughton attending Northmead Boys’ School and then the Central School in Guildford. Seeking adventure he quit school and found work on a P&O liner to South Africa. Returning to England he worked as a postman until becoming a paratrooper in World War II. He participated in the D-Day invasion, landing in a swamp, he spent most of the day avoiding being shelled by the Americans. After the war he worked as a lifeguard and then as manager of Hepworth’s in Guildford. In the 1960s he moved to Amsterdam and became a musician playing the flute. Becoming a participant of the ‘Swingin’ Sixties’ he let his grew hair grow long and toured Europe. Returning again to Guildford he became a manager for various local bands then pursued a modeling career and appeared in several films, TV and music videos. He was always the eternal rebel and was proud of it. Don appeared in one Euro-western as the Indian chief in “North Star” in (1996) with James Caan and Christopher Lambert. Don Backhurst died on 8/26/1999 in Surrey, England.