Who Are Those Gals - Vivi Bach 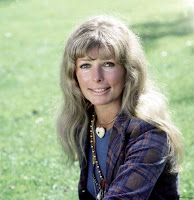 Vivienne Bach was born on September 3, 1939 in Copenhagen, Denmark. Vivi started her singing career as a child singing in a jazz cellar after school. This led to a tour and several appearances in some light and breezy Danish films before making it internationally. She signed a recording contract in Germany in 1960 and her biggest hit was a duet with Gerhard Wendland called “Hey Vivi - Hey Gerhard” which was a copy of the American hit “Hey Paula”. Vivi tried to start her own production company and produced the film “The Secret of the Red Tassel” with Dietmar Schönherr, whom she would marry in 1965. She appeared in a number of musicals, spy films and comedies such as “Ski Fever” (1966) which was nominated for a Golden Globe. During her film career Vivi appeared in two Euro-westerns “Bullets Don’t Argue” (1964) with Rod Cameron and Horst Frank along with a western musical “A Fistful of Songs” (196?). When her film and singing career faded she became a TV presenter. Bach is still married to singer, producer Dietmar Schönherr and is a painter and illustrator for children’s books. Bach and Schönherr live in Ibiza, Spain.
Update: Vivi Bach died on April 22, 2013 from an apparent heart attack at her home in Ibiza, Spain. She was found on a couch vy her husband Dietmar Schönherr who noticed she was not breathing. He summoned her doctor who pronounced her dead from an apparent heart attack. She was 73 years-old.