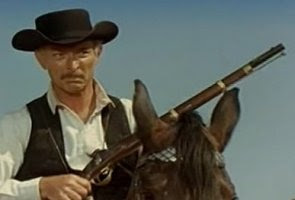 Scott Mary is a young man working as a street sweeper in a small town called Clifton, Arizona. Scott is looked down upon by the town people, and he has never known his father and only knows his mother's first name was Mary. When Frank Talby rides into town and kills one of Scott's bullies, Scott realizes the opportunity to change his life, and decides to prove his worth as a gunfighter to him. Talby soon leaves town to go after Wild Jack, his former associate who owes him $50,000. Scott follows him and Talby reluctantly lets him tag along and agrees to teach him a few rules about gunfighting.

Talby and Scott find Wild Jack, but the man tells the pair that he does not have the money anymore, as he was double-crossed by the seemingly respectable citizens of Clifton. A gunfight ensues and Scott manages to convince Talby of his skills with a revolver. After taking care of Wild Jack's gang, the pair return to Clifton. With the help of Scott "Mary", as he was named by Talby, Talby quickly takes over the town, but Scott's fast draw has now become a threat to him. After he kills Scott's former mentor Murph Short,, the two decide to settle things in a shoot-out. Scott kills all the members of Talby's gang, and then defeats Talby in a duel by taking advantage of the rules Talby once taught him.


You Tube trailer link: http://www.youtube.com/watch?v=kjDAfVrRKfQ
Posted by Tom B. at 5:53 AM