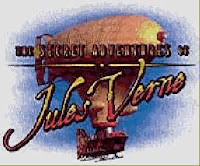 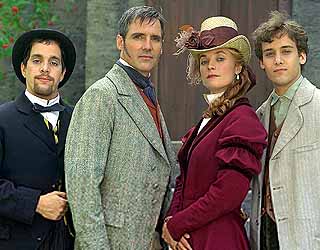 Season 1, episode 10 ‘The Ballad of Steeley Joe’ - While waiting for Passepartout to arrive from Baltimore with the Aurora, Jules, Rebecca, and Phileas pass the time aboard the gambling boat, the Memphis Belle; Phileas by gambling and Jules and Rebecca by socializing with a newspaperman, Sam Clemens. They meet up, also, with a group of ex-Confederate soldiers, including Frank and Jesse James, bent on a life of crime who steal the Aurora and kidnap Passepartout. Using alcohol and a fantastic story about "Steeley Joe" (a robot gunslinger made of iron), Passepartout is able to escape from the gang and find refuge in the town of Apache Wells. Meanwhile, Jules, Rebecca, Phileas, and Sam Clemens also arrive in Apache Wells and with the help of the local saloonkeeper, Miss Lily, and their own version of "Steeley Joe," they are able to thwart the menacing group of bandits and return Apache Wells to a peaceable town.
‘The Secret Adventures of Jules Verne’ was a 22-episode science fiction television series in the steampunk genre that first aired in June 2000 on CBC Television in Canada. The series first ran in the United States on cable on The Sci-Fi Channel (now Syfy).

The plot concept is predicated on a vast fictional conspiracy beginning with the revelation that Jules Verne did not merely write the stories behind his famous science fiction classic books Twenty Thousand Leagues Under the Sea, Journey to the Center of the Earth or Around the World in Eighty Days — but actually experienced these adventures personally.