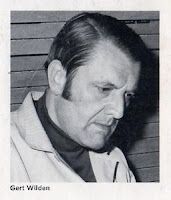 Czechoslovakian composer, conductor, arranger and musician Gert Wilden died September 10th. Born Gerhart Albert Arnold Wychodil on April 15, 1917  and from 1956 until his retirement, he scored music for more than 50 feature films in numerous genres. However, he is perhaps best known for his music for erotic films in the 1970s, especially the Schulmädchen Report (Schoolgirl Report) series. Wilden was married to former actress and singer Trude Hofmeister and the father of composer Gert Wilden Jr. [1960- ]. Gert was the composer for one Euro-western “Black Eagle of Santa Fe (1964) starring Brad Harris, Horst Frank and Tony Kendall.
Posted by Tom B. at 1:21 PM