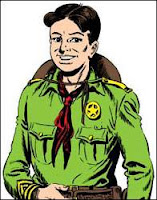 Capitan Miki (translation: Captain Miki) was an Italian comic book, created by the trio EsseGesse. Miki was first published in Italy on July 1, 1951. It gained great commercial success, selling over 500,000 copies per week and launching the careers of its three authors. During its run 68 issues of Tuttomiki were published.

Miki is a young boy who, after carrying out a number of successful missions is promoted, in spite of his young age, to the rank of captain of the Nevada Rangers. Miki has a young fiancée, Susy, the daughter of the fort commandant. His best friends are Doppio Rhum (Double Rum) and Doctor Salasso. Doppio Rhum was inspired by the actor Gabby Hayes who appeared in many western films of the 1930s and 1940s, and Doctor Salasso by the drunken Doc, portrayed by Thomas Mitchell in the classic western film Stagecoach (1939).

EsseGesse was an Italian team of cartoonists, most famous for their Western comics, which were popular in the 1950s. The comics were translated to French, Serbo-Croatian, Turkish, Greek, Swedish, Danish and Norwegian.

After Sartoris and Sinchetto passed on in 1989 and 1991 respectively, Guzzon was the only one left capable of designing and supervising the stories of Mark and his Ontario Wolves in Special Albums; so the baton was completely handed over to the illustrator Lina Buffolente, another artist of Italian cartoons, mainly known for her contribution to the "Il piccolo Ranger" saga. The scripts were instead developed over the following years by Bonelli's new generation of authors, such as Moreno Burattini, Luigi Mignacco and Michele Masiero. The passing away of Guzzon in May n3, 2000 finally marked the end of EsseGesse.