We continue our search for locations for “The Gatling Gun”. After Tarpas makes a deal with Doctor Curtis and Wallace to turn over Gatling for a million dollars in diamonds at the old mission, he makes arrangements with Belle Boyd and Bishop to exchange the Gatling Gun at Rio Rojo for a million dollars in jewelry collected by Boyd from Confederate wives and widows. When Belle asks about Gatling, Tarpas tells her had some troubles and is now dead. Belle also asks if Tarpas has offered the gun to anyone else, especially a stranger who was snooping around at Gatling’s house. Tarpas says he will send men to the house to look for the stranger and walks off. 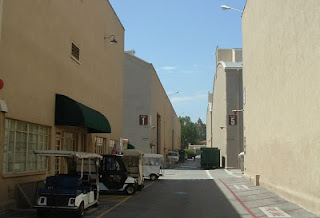 Interior shots were filmed at Elios Studios outside of Rome, Italy.