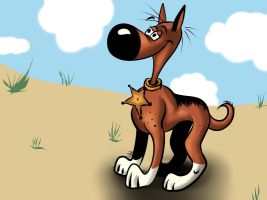 Rantanplan (alternately spelled Ran-Tan-Plan and Ran Tan Plan) is a fictional hound dog created by Belgian comics artist Morris and French writer René Goscinny. He is a prison guard dog often tasked with watching over the Dalton brothers or assisting Lucky Luke track them down each time they escape. However, he is unable to understand this and mistakes Joe Dalton, who hates him psychotically, for a beloved owner. As well as stupid, Rantanplan is incredibly slow and accident-prone, he also mistakes almost everything. However, he is very good natured, and will follow Lucky Luke to the ends of the Earth, one of the few people he recognizes on any persistent basis. Like Averell Dalton, he has a huge appetite and will devour anything that is put in front of him, whether it is food or not, which has ranged from bars of soap to dishwater.

In 2006, the production company Xilam produced an animated series of Morris's Rantanplan stories in 90 second episodes, broadcast on France 3. It was broadcast in Canada on YTV under the name Rintindumb, and was distributed by Warner Bros. Television. It featured the voices of Maurice LaMarche and Rob Paulsen. It later appeared on Rovio's ToonsTV.