We continue our search for locations for “The Gatling Gun”. Tanner meets the Doc Curtis at White Valley as planned only to find Wallace, who gets the drop on him and tells Chris once he gets the information he needs from him he’s going to carry out the death sentence he’s been given and will shoot him. A fight breaks out and the Wallace and Tanner tumble down an embankment into a river followed by Curtis. Tanner wins the struggle and tells Wallace he’s wrong but he hasn’t got the time to explain. Tanner mounts his horse and rides away.

After Wallace and Curtis climb out of the river they are surprised by Tarpas. Tarpas sets up a time to exchange Richard Gatlin for the million dollars in diamonds at the old mission. 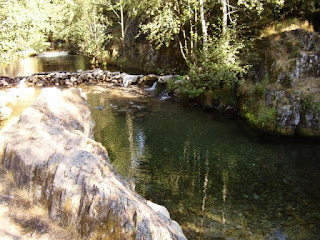 The scene of the fight and the meeting with Tarpas is in the vicinity of Covarrubias, Spain and the same area the famous battle for Langstone Bridge was filmed for “The Good, the Bad and the Ugly”. In the first screenshot below you can see the distinctive plateau in the distance. 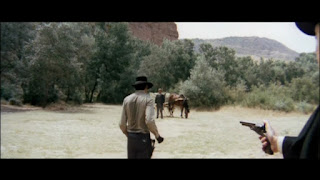 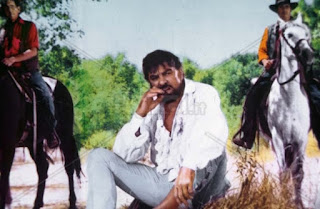 For a more detailed view of this site and other Spaghetti Western locations please visit my friend Yoshi Yasuda’s location site: http://y-yasuda.net/film-location.htm  and Captain Douglas Film Locations http://www.western-locations-spain.com/
Posted by Tom B. at 7:26 AM