WINNETOONS: THE SECRET OF SILVER LAKE 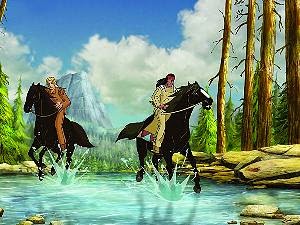 Arizona 1869: A New York orphan named Bobby is on his way to the Wild West and wants to make his fortune there. He has brought a treasure map, on which is targeted the villainous bandit Colonel Brinkley and his gang. Brinkley brings the boy into his power and abducts Winnetou's little sister Nscho-chi. The Apache chief and his blood brother Shatterhand immediately go in search of Brinkley's gang. But only at Silver Lake are the two heroes able to confront the gang and rescue the children.
YouTube Trailer: https://www.youtube.com/watch?v=PauOyKhgVgE
Posted by Tom B. at 6:03 AM