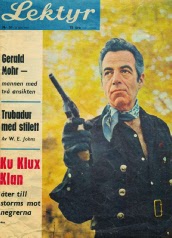 ‘Revolver Kid’ Anderson leaves the town Small Land Hills in the west and moves back to Sweden to run a circus. But when there´s trouble for his old friend Old Joe he sends his son, Lucky Anderson, back to help him. Lucky arrives in town riding a donkey and is a member of “Save the Gunshot Fearing Children”, but of course he´s a real sharpshooter when needed. Old Joe who owns all the land in the area, is having problems with the bandit Gonzalez and his band who are trying to get hold of the land deeds because there is oil on the land, and also some Indians who have forgotten where they buried their battle ax, so they are harmless until they find the right spot so they can dig it up again. Lucky is immediately appointed sheriff by the crooked judge who is in league with Gonzalez, known as "The Fastest Gun in the West". Then appears a troupe with dancing girls and a troubadour, the bandits all fall head over heels in love and go out and pick flowers. So it continues with stupidity and nonsense until the predictable ending with a huge brawl.
Posted by Tom B. at 8:17 AM