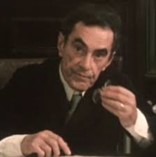 Robert Dryden was one of radio's busiest and most versatile character actors throughout the 1940s and 1950s. He was frequently heard on such classic radio shows as “Gangbusters”, “The FBI In Peace And War”, “Studio One”, “The Ford Theater”, “Casey Crime Photographer”, “Mollee Mystery Theater” and many other dramatic programs as well as on numerous soap operas. In the 1970s Dryden starred with Peg Lynch on” Lynch's Little Things In Life” radio series and was a frequent performer on Himan Brown's “CBS Mystery Theater” series.

Dryden was a voice-over regular on the popular 1930s radio series "Gangbusters" that featured weekly episodes based actual crime incidents. Each program ended with various descriptions of wanted criminals, many of whom were later arrested due to avid listener participation.

A Fistful of Dollars 1964 – [English voice of Joseph Egger]

The Good, the Bad and the Ugly – 1966 [English voice of mission padre]