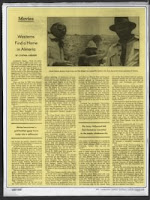 ALMERIA, Spain – Well, it’s taken something like a 1000 years and a recent invention called the movies to put the small southern coastal town of Almeria back on the map of Spain as it were. In the year AD 1000 Almeria was the home of the Moorish kings, the biggest port on the whole Mediterranean with the grandest Alcazabar (fortress) in the land. From then right to 1965 Almeria’s career has been straight downhill.

Then one day in 1962 Sam Spiegel and his cohorts moved into the sleepy little fishing town to use the desert back country with its temperatures in the hundreds for “Lawrence of Arabia” locations. But Almeria and the movies really found one another in 1965. Some 150 movies since then have been shot nonstop in Almeria and most of them westerns: French westerns, Italian westerns, German westerns. And American western. Plus every combination coproduction western you can think of.

Three thousand hours of utterly dependable sun a year, year in and year out, shining away in piercingly blue, cloudless skies. Rugged, stark land with gullies, mountains, valley, dried up river beds, cacti, deserted and silent but for crickets and an occasional wind stirring up miniature sandstorms. Sergio Leone, daddy of the spaghetti western, in fact far prefers Almeria’s western look to the real thing in Arizona after having worked in both.

All this western perfection is only 10, 15 minutes by car on good roads from greenery, swimming pools, relative fleshpots, miles of great natural beaches and the sea stretching out to Africa. Producers enjoy the bountiful supply of cheap labor and the virtually inexhaustible supply of extras. Cave dwelling gypsies from the barrio of La Chanca supply Indians, Mexicans and Spaniards when needed. Retired English families and their progeny of which there is a large colony are available for roles of American settlers.

The movies have turned gold-tooth gypsy horse-trader Medina Moreno into a millionaire supplying horses the myriad producers of westerns over the last five years. He still boards at his fancy Madrid finca two camels left over from “Lawrence of Arabia.”

The general effect of the movies on the local economy has been equally rather dazzling. A handsome international airport was inaugurated by Gen. Francisco Franco himself two years ago with direct flights to all the European movie capitols: London, Paris, Rome. Until the airport was built you had the choice of 14 hours by train from Madrid or four hours of hairpin turns on a high coastal road from the nearest airport in Malaga, an experience that unnerved more than one Hollywood star.

From having a grand total of 55 beds in second class pensions over 10 years ago Almeria now is touchingly proud of its 22 first class hotels, most of them equipped with air conditioning and their own swimming pool. As of two years ago the town can even boast of a three fork restaurant, Juan Pedro’s, with superlative freshly caught seafood.

The Gran Hotel where most of the movie folk elect to stay certainly has all the requisite creature comforts, but curiously was built to overlook a shipping pier, a truck driving school located in a dried up river-bed, and the railway yards instead of the very impressive pale gold stone Alcazabar high on a hill looking down on the town.

In view of Almeria’s local growth the national government in Madrid has been accordingly weighty credits for roadbuilding, electrification and general urbanization of the entire province. It is bruited about in Almeria, although certainly not around the official tourist office, that the reason the national government was so slow in kicking in credits was that Gen. Franco is a grudge holder. Almeria was one of the very last cities to fall to nationalist forces – March 31, 1939 – and this, people say, Franco found hard to forgive.

The year 1970 has been the virtual apotheosis for the western in Almeria what with the likes of Burt Lancaster, Kirk Douglas, Yul Brynner, Oliver Reed, Candice Bergen, Faye Dunaway, Rod Steiger, James Coburn, Maria Schell, Jack Palance, Franco Nero, Sergio Leone and Frank Perry, back again, all more or less co-resident at the Gran Hotel.

The films themselves this year represent just about every variant possible on the form of the western known to man from the old-fashioned kind aimed to relax the tired businessman through Frank Perry’s “Doc” wherein Doc Holliday becomes an existential hero and Wyatt Earp an anti-hero patterned after L.B.J. to a French film rendering of “Hamlet” as a western – the authors present Hamlet as traumatized into mutism by his father’s death thereby avoiding those troublesome soliloquies.

New ghost towns of the Old West are beginning to populate the regions of the country back of Almeria as one production after another packs up and moves on, leaving its set standing. “Docs” Oscar-winning designer Gene Callahan is privately tickled at his version of the scorched-earth policy to be applied to his set at the end of the shooting.

Callahan has created Tombstone, Ariz., of the early 1880s in what the film flack claims is the largest set ever built for any western anywhere – 74 buildings covering seven acres, and most of them in three dimensions. The script calls for a final shot in which the entire town is to be painted in monochrome to harmonize with the desert land representing Limbo. “Anybody else who comes in here after us is going to have plenty of painting to do, I can tell you,” says Callahan with a certain satisfaction, “before they use my set again.”

Productions leave their mark on the land in other ways as well. The desert plains where George C. Scott fought the Battle of Tunis north of Almeria are now known locally as “Patton’s Plains.” The fortress left over from “El Condor” has become a permanent part of the landscape: Fort Condor. And on a tinier scale the calls sheets for Burt Lancaster’s “Valdez” are serving in the outhouses for the crew on “Doc” who receive their pay in envelopes left over from “The Hunting Party” of Candice Bergen and Oliver Reed.

All the fancy Hollywood folk who come to Almeria find themselves completely willy-nilly to the simply wholesome life. With the daily call at six they are more or less forced to the early-to-bed-early-to-rise life style. The local watering hole is the second floor bar of the Gran Hotel with it squishy imitation leather red bar rail and local barmen trained to the intricacies of Gimlets and Bullseyes and Bloody Marys.

Sand-laden daytime Levis are shed for fresh evening Levis and that about takes care of the sartorial scene. Almeria low life consists of one tatty bar down by the port where middle-aged whore strip to torn fishnet body stockings. “You have to be really desperate to go to Juango’,s said one Almeria movie veteran.

The superstars and directors can live 20 minutes out of town at the elegant luxury resort Aguadulce (Sweetwater) – another creation due to movie prosperity – in independent bungalows complete with pool and maid service, but many who do end up like Burt Lancaster who after a week or so there just plain found it too lonely out there nights and came in nightly for the cheery bright lights of the Gran Hotel Bar and poker games with the boys from the crew.

People do occasionally get a bit stir crazy from protracted stays in Almeria. Brian Hammill, brother of Pete Hammill, scriptwriter of “Doc,” who’d been acting in the film, found it was the little things in life at the Gran that bugged him. “Those postage-sized bathmats for one thing, and the peace symbol staring up at me every morning from the washbasin drain. Too much.” He became a weekend commuter to Rome.

Convinced of the movie-making future of their town, municipal authorities are currently striving with the Madrid government for permission and funds to build regular studios and movie labs, so all the lovely movie money won’t have to leave town as soon as shooting is completed. So far the central government hasn’t shown any haste about acceding to these requests, perhaps because of those studios and labs in Madrid. But the Almerians are still trying.

And as the sun sinks low into the sea and we take farewell of the prosperous little Almeria we note the town is a flutter with the imminent arrival of the real-life mythological figure Brigitte Bardot for a Prohibition – period rum-running western and we see writer Dan Greenburg (who acts during the day in Frank Perry’s “Doc”) writing down his day’s notes for “The Journal of a Jewish Cow-Poke.”