The western returns home: 'Infortunio' presents its credentials in Tabernas 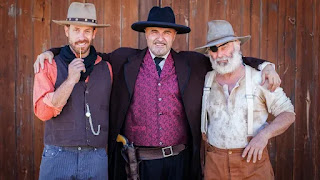 The non-transferable aesthetics of the Coen brothers, the violent action of Sam Peckinpah, the spirit of maestro John Ford and the gaze of a filmmaker from La Mancha. With these credentials the short 'Infortunio' is presented, with which Manuel Olaya, director of the award-winning 'Arizona 1878', returns to the genre and to the West of Almeria. He does it this weekend to shoot a 'teaser' on the Oasys MiniHollywood sets in Tabernas and then in September to complete the filming.

"The western is a candy for many festivals," he tells LA VOZ about the success of 'Arizona 1878', which has nearly 40 official selections (the Almería Western Film Festival, among them) and nearly twenty awards. "It is the genre where I move best, the one I know the best, " he acknowledges about a project he has conceived for those who, like him, consider themselves "lovers" of gunfighter movies.

In 'Infortunio', a story that opens with an assault on a Wells Fargo stagecoach ("and from here on it's pure western", he anticipates), Olaya, a native of the Albacete town of Almansa, returns to reunite almost completely the team of 'Arizona 1878' , which brought him to the locations of Tabernas in 2016: the production companies JAG Dreams, from Garrucha, and IMGrafía, from Evelina Zukauskaite, from San Isidro (Níjar), and a cast that includes Álex Navarro ( 'Águila Roja'), José Varela (one of the most recognizable faces of the western peasantry and Almeria figuration) and Pedro López, "great friend" of the director who has participated in series such as 'Amar en tiempo revolstos', 'Isabel' , 'Toy Boy' and 'The Secret of Puente Viejo'.

"Money, greed and, sometimes, the misfortune of those who do not act in good faith" are, in the words of the director, the great themes of the short film, whose production design "will include many nods" to John Ford's cinema. "I have been working with the actors for more than a month, doing online script readings and working on their characters. The direction of actors is very important and that is where I have focused," he says before returning to Tabernas, where he was a few weeks ago. finalizing details of the locations where it will shoot.

Manuel Olaya has commissioned the soundtrack of 'Infortunio', which counts as 'Arizona 1878' with the collaboration of the Oasys MiniHollywood , to the Almeria musician David Miralles, while Armería Leonardo will be in charge of the costumes and props.