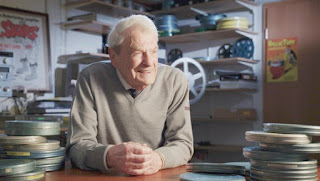 Ask any Dutchman who is the most successful filmmaker and you will see names of directors such as Fons Rademakers, Bert Haanstra and Paul Verhoeven.

But when it comes to the amount of successful films produced, all these greats of Dutch film have to tolerate one man, with distance. And that is the nestor of the Dutch children's film, Henk van der Linden.

43 children's films
This native Limburger, unique because of his idiosyncratic way of working, holds many records from the world of film. For five decades, his 43 children's films, especially those about national comic book heroes such as Dik Trom and Sjors & Sjimmie, drew full houses.

His most successful film, which ran in cinemas for 28 consecutive years (!) even earned him a mention in the Guinness Book of Records.

Where many documentaries have been made about many well-known and inspiring Dutch filmmakers, Henk van der Linden of all people shines here because of his absence. Incomprehensible. Bizarre. And actually a gossip too.

The Big Child of the Dutch film
Filmmuseum Eye is currently digitizing its films, because of their value for posterity. But the record of this film icon, who at 94 years is in the winter of his own naughty boy's book - or rather: -film, cries out for more: one last, film document. And this time not from, but about Henk van der Linden, the ultimate autodidact, do-it-yourselfer and above all the Big Child of Dutch film.

Furthermore, people who have been fans of his films all their lives tell their story. For example, filmmaker Maria Peters was inspired by his work. And Frank Roumen, programmer of the Eye film museum, is busy digitizing his films, so that the oeuvre of one of the Netherlands' most striking film makers is preserved for posterity.

Henk wouldn't even come up with the idea to put himself in the spotlight - that's why this documentary does, as a tribute to an icon.